Trending
You are at:Home»Gadgets»Swatch reveals plan to compete with smartwatch rivals

Swatch Group, the world’s bestselling watchmaker, is to introduce models that can make contactless payments and display data sent by smartphones.

The Swiss company’s chief executive said the first of the tech-enhanced timepieces would go on sale in May.

But he said he had no plans to sell the kinds of fully featured smartwatches being offered by Apple, Motorola, Pebble and others.

Swatch accounts for 18% of all watch sales, according to industry data.

The company, which makes devices under the Omega, Breguet, Calvin Klein, Rado and other brands, as well as its own, has consistently increased its market share over the past five years.

It recently reported 8.7bn Swiss francs ($9.2bn; £6.2bn) of sales for its last financial year, a 3% improvement on the previous period.

However, some observers believe it and other mainstream watchmakers face disruption from tech industry giants who have begun selling wearable products. 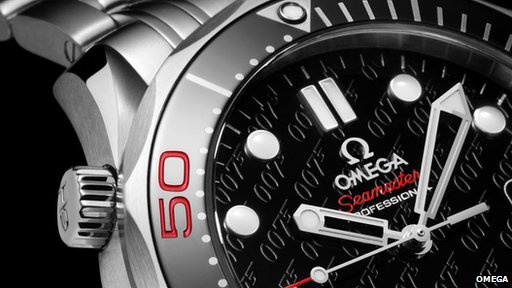 Swatch said it had teamed up with China UnionPay, a Chinese credit card association, to provide touchless payments in that country. Reuters news agency reported that a similar deal with Visa is believed to be in the works for other parts of the world.

However, Mr Hayek indicated that Swatch would leave it up to others to unlock the full potential of its moves.

“Whatever usage you want, you ask some creative people to create some apps and then our chip has different layers that you can program yourself – we give it to you,” he told a press conference in the Swiss town of Corgemont.

“You buy your Swatch, the one you like, and then you configure it.”

He added that he believed that his company’s expertise in manufacturing “ultra-low power” watches gave it an advantage over tech firms, whose products typically need to be recharged daily. 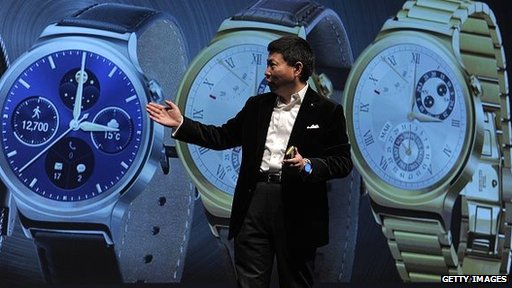 Huawei and other tech firms are launching fashion-conscious smartwatches

But he made clear that he had no intention of developing a product to go head-to-head with Android Wear or Apple’s Watch OS.

“We are not a consumer electronics company,” he said.

“We are not going to transform and put the mobile phone on the wrist. Let the others do it. Samsung did it, Sony did it. Everybody does it.”

But Swatch is releasing an update to its existing fitness tracker. 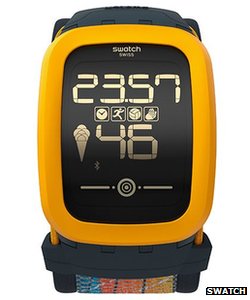 The new waterproof Swatch Touch Zero One is targeted at beach volleyball players and can track their number of footsteps and measure how hard they smack the ball with their hands.

It uses one of the company’s standard batteries, which Swatch says lasts months between needing to be swapped.

Earlier this week, Elmar Mock – one of Swatch’s original engineers, who now heads the Creaholic consultancy – said his former employer risked underestimating the threat it faced from Silicon Valley

“Swatch, on the other hand, should be taking a leading role.

“Swiss watchmakers seem to have forgotten how they underestimated Japanese quartz watches in the 1970s as mere gadgets and not real watches. That mistake led to the near-collapse of the watch industry.”

However, one industry analyst told the BBC he thought that Swatch was relatively well placed to maintain its lead. 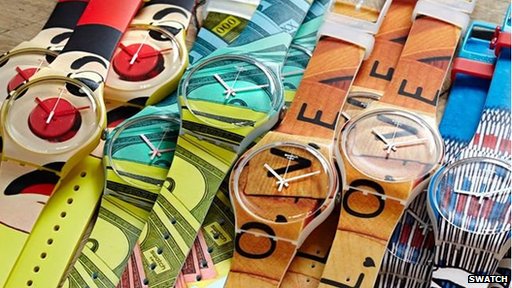 “I like that Swatch has its own strategy – we have seen so many me-too products over the past year, and it’s good that Swatch is putting a very strong focus on battery power,” said Pascal Koenig, of the Smartwatch Group consultancy.

“I do think, however, that Swatch is not good on the software side. It needs to do more on apps.

“But it has a lot of cash on its balance sheet that could be used for an acquisition to help with that.”

Other leading watchmakers, including Fossil and Tag Heuer, are expected to outline their smartwatch strategies at the Baselworld trade show in Switzerland next week.